Home » Exhibitions » The Berliner of Montreal

The Berliner of Montreal 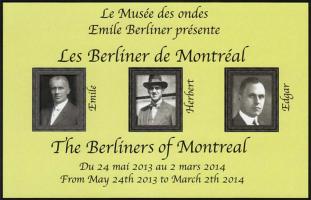 This is the story of two generations of Jewish immigrants, who have helped to make Montreal an important center of technological developments in the 20th century. This story began in the German city of Hanover in 1851 with the birth of Emile Berliner. The son of a well-known Talmudic merchant and an amateur musician, Emile would become an important inventor of the late 19thC and early 20thC and a successful international businessman. With the help of two of his sons Herbert and Edgar, innovators in their own right, he would launch the recording industry in Canada and establish in Montreal the Berliner Gram-o-phone, one of the most successful technological companies in Canada. Today Canadians fondly remember the Company as RCA-Victor.

Beyond their contribution to recorded sound technology, the Berliners must also be remembered as visionaries and philanthropists who have done a lot, not only for Montreal’s Jewish community but for the whole of Canada. They were involved in social causes such as milk pasteurization, access to higher education for women and the hard-fought struggle against tuberculosis.

The Berliners were indeed men of vision and commitment. They belonged to a class of people who decided to pool their financial resources to help the needy. In the great tradition of Baron Maurice de Hirsch and Edmond de Rothschild, the Berliners were in Montreal, with Mortimer B. Davis and Samuel Bronfman, great figures of Jewish philanthropy.