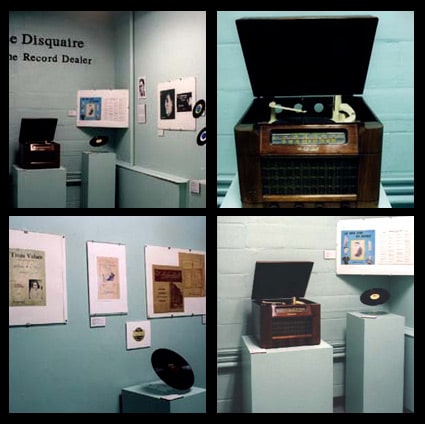 After completing studies at the Collège de L’Assomption, Edmond Archambault moved to Montréal where the musical life was far more exciting. He became a piano teacher and the organist of the Church of Saint-Pierre-Apôtre. In 1896, with only $130.00, Edmond Archambault opened a counter to sell sheet music. He rented a space in the J.A. Hurteau piano store at 1626 Sainte-Catherine Street East (near Saint-Hubert). A year later, he and Hurteau moved to 1686 Sainte-Catherine East close to Saint-Denis, later to become 408. The Archambault store grew rapidly and added to the sale of music scores, the publishing the works of numerous Quebec composers and the sale of musical instruments. In 1919, Edmond Archambault bought out J.A. Hurteau, which allowed him to expand his store considerably. After this acquisition, Archambault Enr began to sell Gramophones and presumably, records. In 1930, Ed. Archambault Inc. opened its new head office at the intersection of Ste-Catherine and Berri Streets, (500 Ste-Catherine St. East). Upon the death of Ed Archambault in 1947, his nephews Pierre, Edmond and Rosaire took over the business.

After completing studies at the business school of the Université de Montréal, (the École de Hautes Études Commercial or HEC) in 1941 and a year and one-half at Northern Electric, he was finally hired by his uncle Edmond’s store in 1943. Upon the death of the latter, Rosaire took over the record department. It was after this that Ed Archambault Inc. became the best known and most highly regarded music business in Quebec. During the 1950’s Rosaire started two record labels for the Archambeault Company. The first, Alouette (1952), was dedicated to recordings of folk and traditional music. The second, Sélect (1959), included classical, religious, popular and educational recordings. In short, these two labels allowed Quebec singer-songwriters to record their material. In this way, Rosaire Archambault was instrumental in advancing the careers of artists such as Jacques Blanchet, Hervé Brousseau, Pierre Pétel, Jean-Pierre Ferland and Raymond Lévesque.

Since the mid-1980s, Archambault-Sélect has been one of the most important production and distribution houses in the country. In 1995, Archambault Musique merged with Trans-Canada to form a new enterprise, Musicor-GAM, to distribute CDs and videos. That same year, Communication Québécor, acquired a contolling interest in Trans-Canada-Archambault. On September 15, 1999, Québécor launched the website www.archambault.ca, which is the largest francophone virtuel store in North America. This site has a catalogue of over 100,000 compact discs. From its humble beginnings as a counter selling sheet music in a store on Ste-Catherine Street in 1896, Archambault has grown into a conglomerate which includes the record labels Select and Musicor, Trans-Canada Distribution, a major record distributor eleven in the Archambault stores, an E-commerce store – www.archambault.ca and PolySons, a wholesale distributor. A 104 year success story!