Home » Exhibitions » Discovering our collection: Bakelite in the television age

Discovering our collection: Bakelite in the television age 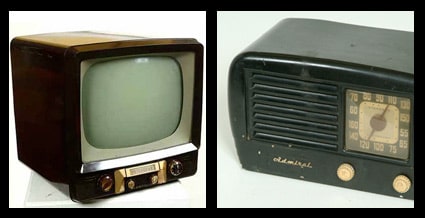 Born in Gand, Belgium in 1863, Leo Baekeland obtained his doctorate in 1884 at the tender age of 21. Following a short career as a professor at the University of Bruges, the brilliant chemist immigrated to the New World and the United States. It was there that Baekeland was to achieve his first master stroke, with the development of Velox photographic paper. He sold his invention to Kodak for one million dollars, a fantastic sum for the time. His new-found fortune allowed him to pursue his interest in a chemical reaction which produced a gummy residue material resembling tar. Originally, he was looking for a solvent for this material, but instead found a previously unknown synthetic substance. In 1909, he named it Bakelite after himself. In 1924, he was honoured by the American Chemical Society which named him president of that association. Leo Baekeland died in Beacon, NY on February 23, 1944. The Admiral of Canada Company was incorporated in 1946, just one year after the end of World War II. Thirty-five years later, in 1981, the company closed its doors.

The American parent company had a much longer career than its Canadian subsidiary. The story begins in the nineteen twenties when Lavern Slagle decided to start his own company and in 1924 created the “Slagle Radio Corporation”. In 1934, the name of the company was changed to the “Continental Radio and Television Corporation” to reflect a new orientation for the company towards a new technology – television. Financial problems caused by the stock market crash of 1929 brought the company close to bankruptcy. The company was only saved by the economic boost created by the War. In 1943, the company name was changed again to the “Admiral Corporation” to reflect this new-found prosperity. Nevertheless, it was not until after the cessation of hostilities that television was to become a reality. New materials such as Bakelite were used for television set cases from its beginnings in 1948.

In 1907, Leo Hendrik Baekeland became interested in the tar-like residue formed by a chemical reaction between Phenol and Formaldehyde. He observed that the residue was hard and resistant to both heat and solvents. After much experimentation, Baekeland, in 1909, announced the existence of his new substance, which he named Bakelite after himself. If this material was not the first plastic, it was certainly the first thermo-setting plastic. The first plastic, celluloid, had been developed in 1869 by John Hyatt as a substitute for ivory in billiard balls. Bakelite, because it could be molded into almost any shape, found numerous uses, such as casings for radios and TV sets, as well as electrical insulators, jewellery and the telephone. The ball-point pen owes its very existence to Bakelite. It would be correct to say that the invention of Bakelite started the course towards the development of all modern plastics.