Home » Exhibitions » Year after year… The donations to the MOEB

Year after year… The donations to the MOEB 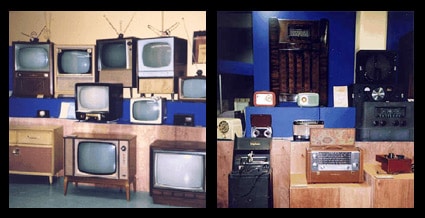 The exhibition “Year after year… The donations to the Musée des ondes Emile Berliner” presents a selection of our best acquisitions: 150 objects given as donations by more than 50 different donors. More than one hundred different donors, over the last five years, have helped to create the collection of the Musée des ondes Emile Berliner; thanks to their generosity, a collection that is becoming increasingly interesting, from a historical perspective as well as from the perspective of today’s technology.

You will have the opportunity to see a gramophone from 1910, a Telefunken crystal radio from 1917, an Ediphone from the 1920’s, a combination shortwave radio and phonograph from 1935, a wire recorder from the 1940’s, television sets from the 1950,s and a microphone from the 1940’s and transistor radios from the 1960s. The exhibition will also present promotional objects, vacuum tubes, circuit diagrams, maintenance and repair manuals, cylinders, records starting with an 1899 pressing donated by one of Emile Berliner’s descendants, 78 RPM disks recorded on a single side, colour-coded 45s and Long-Playing 33 RPM record albums. A series of training films, produced in the 1960s for RCA sales staff, will be presented continuously during the exhibition.

A visit to the exhibition “Year after year… The donations to the Musée des ondes Emile Berliner” will allow you to discover examples of the technological heritage of the twentieth century conceived by companies such as Admiral, Edison, Berliner Gramophone, Brunswick, Crosley, De Forest, Hallicrafters, Marconi, Northern Electric, Philco, Stromberg-Carlson, RCA Victor, Rogers and many more.

This exhibition has received financial support from the Entente on the cultural development of Montreal, an agreement between the City of Montreal and the Ministère de la Culture and des Communications.