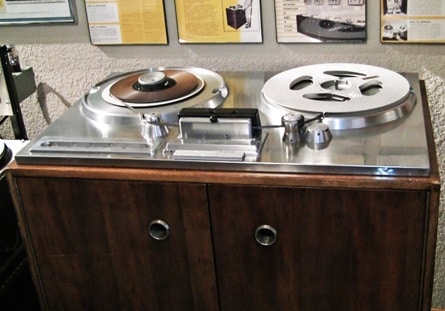 The original 1947 Ampex 200A from Capitol Records. Photo courtesy of the Museum of Magnetic Sound Recording.

During the course of its 40 odd years of existence, the Compo Company recorded many Canadian artists; under its own Compo label, but also under the Apex label.  In 1925, when the Starr Piano Co. ended its recording activities, Compo took over the Starr name and continued to use it until 1953.  Starting in the early 1930’s, Compo also began a long association with Decca Records.  Among the artists that benefited from H. S. Berliner’s expertise and that of his staff, which included Robert Chislett and John Bradley, were such greats as Mary Travers (La Bolduc), J. O. La Madeleine, Isidore Soucy, Rex Battle, Paul Dufault, Rodolphe Plamondon and Don Messer and his Islanders, as well as singers Eugène Daignault, Ovila Légaré, Charles Marchand and Marcel Martel.

Compo Studio opened its doors at 117 Metcalfe Street in July 1921, where it proceeded to launch the Apex label.  Kept at the forefront of technological developments by its owner, H. S. Berliner, Compo soon distinguished itself in the field of sound recording.  For one thing, in 1924, it made the first electrical recordings in Canada.  The following year, it innovated once again by being the first to get involved in recording directly from radio broadcasts. In 1929, this involvement would lead H.S. Berliner, who searched for means to lengthen recording times on disks, to carry out the first experiments with 33-1/3 rpm records.  In the 1930s, Compo Studio was moved to the 9th floor of the Lennox building on Bleury Street.  In 1948, Berliner hired John Bradley as his assistant and recording engineer/producer, a post he held until 1966.  In 1949 or 50, Compo also became the first private recording studio in Montreal to record on magnetic tape, using an Ampex model 200 tape recorder.