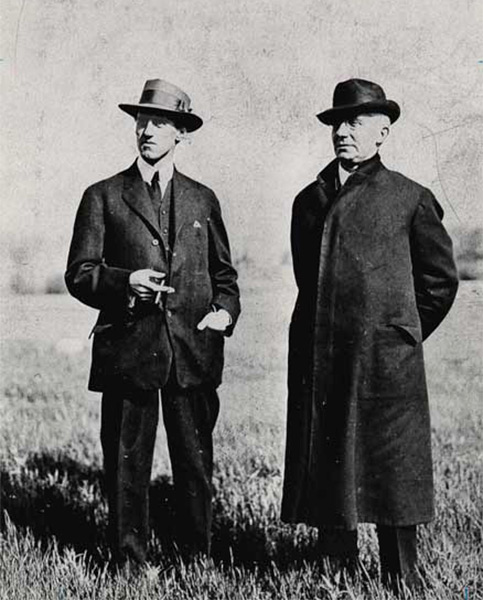 When the Berliner Gram-O-Phone Company of Canada received its charter in 1904, Herbert Samuel (H. S.) Berliner (1882-1966), the eldest son of Emile Berliner, was 24 years old.  Along with two other shareholders, he was named director of the new company.  Could he have known at the time that he would spend the next 60 years in the business of sound recording and become one of the most celebrated figure, after his father, of that industry?

Passionate about technical matters and innovations, H. S. Berliner managed all his life to stay at the forefront of his industry’s many developments.  While working for Berliner, for instance, he was among the first in the industry to establish in 1919 a collaboration with a radio station; in this case XWA (which later became CFCF), Canada’s first licensed radio station.  A few months prior to this, Berliner had already innovated by opening in Lachine, near Montreal, his own enterprise called Compo Company Limited, the “First Canadian independent record pressing plant; also the largest of its day.”  After leaving his father’s company in 1921, H.S. Berliner remained an innovator, but he did so thereafter from the helm of Compo, his own creation.  He was to lead this company until 1951 when, thinking that he had cancer, he sold it to Decca Records of England.  Decca would in turn be bought by MCA Records in 1963.  In spite of these changes, Berliner remained associated with his former company until his death in 1966.

During the course of its 40 odd years of existence, the Compo Company recorded many Canadian artists; under its own Compo label, but also under the Apex label.  In 1925, when the Starr Piano Co. ended its recording activities, Compo took over the Starr name and continued to use it until 1953.  Starting in the early 1930’s, Compo began a long association with Decca Records.  Among the artists that benefited from H. S. Berliner and his the expertise of his staff including Robert Chislett and John Bradley were such greats as Mary Travers (La Bolduc), J. O. La Madeleine, Isidore Soucy, Rex Battle, Paul Dufaut, Rodolphe Plamondon and Don Messer and his Islanders, as well as singers Eugène Daignault, Ovila Légaré, Charles Marchand and Marcel Martel.