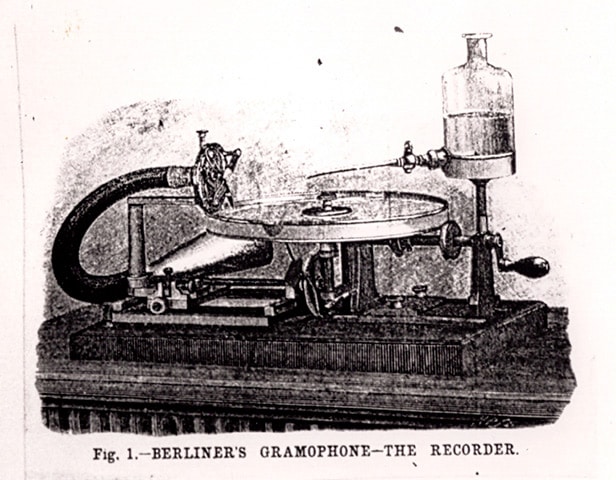 Even though Thomas Edison was the first to invent a machine that could record and playback sound, it is to Emile Berliner that we owe the greatest debt of gratitude for the spread of this new technology and the rapid growth of the sound recording industry.  Where Edison’s phonographs used cylinders that had to be recorded one at a time, Berliner’s own invention, the gramophone, made use of flat records that could be pressed in great numbers from the mould of a single original recording.  It is no wonder that records eventually won out over cylinders.

In the early years of the 20th Century, sound recording efforts in Montreal were thus primarily focused on disk cutting technology.  Efforts were made to develop better acoustic and cutting tools, as well as better suited materials for the production of records.  All the while, research was continuing in other related fields.  In 1916, this would lead to the invention of the first effective condenser microphone by E. C. Wente at Bell Labs, which was only brought to market 10 years later by Western Electric.  1924 saw the introduction of electric recording and in 1925 General Electric introduced the dynamic moving-coil loudspeaker.

Born in Hanover, Germany, in 1851, Emile Berliner immigrated to the United States in 1870 where he proceeded to become a self-taught scientist and an inventor. He made his first significant breakthrough in 1877, when he invented a microphone that revolutionized the telephone industry. Over the years, he would invent several other items, in a variety of fields, but none better known than his famous gramophone and accompanying flat disks for which he was granted a US patent in 1887. Ten years later, the inventor was granted a Canadian patent for the same invention and, shortly thereafter, opened an office in Montreal.

Over the next 25 years, working in association with related enterprises in the USA, Britain and Germany, Berliner was to preside over the rise of the industry he helped to create and see his invention blanket the whole of the planet. He passed away in 1929 – recognized by all as a giant in the development of modern technology.

“It is thanks to the initiative of the Berliner Gramophone Company, if we have today in Montreal, all that we need to produce our own people’s records.” It is in these words, written in 1919, that a journalist from the magazine Le Passe Temps acknowledged the importance of the work that was carried out by Emile Berliner’s recording studio. The studio’s presence was well known and appreciated.

In operation since 1904, the studio played an important role in the early part of this century in recording the music of Canadian artists, both French and English. Among these were such admired artists as singers Joseph Saucier, Emma Albani, Pauline Donalda, Mark Hambourg, Paul Dufault, Henri Prieur, as well as the Hart House string quartet and conductor Henri Miro who served as musical director for the Berliner Gramophone Company from 1916 to 1921.