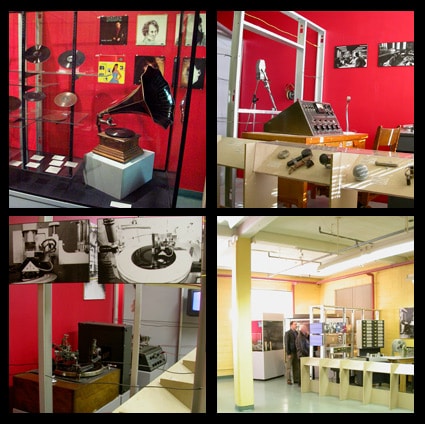 Would you believe that a hundred years have come and gone since the day Emile Berliner, the inventor of the gramophone, opened the first Canadian recording studio on Peel Street in Montreal? The year was 1904 and very few people could have imagined at the time the full impact that this event would have on the world, as they knew it back then. The opening of this studio marked the beginning of an industrial adventure that revolutionized the world of communications and introduced music and sound recordings in every household in the country. We present this exhibition as a tribute to Berliner’s efforts and that of all of the individuals who followed in his footsteps – one hundred years of dedication and achievements in the field of sound recording.

At the heart of this adventure, we find sound recording pioneers, such as Berliner and his sons, Edgar and Herbert, A. Hugh Joseph, Jean-Marc Audet and many others. We also find many sound recording studios that have thrived in Montreal over the last century. These include H. S. Berliner’s Compo Studio, the RCA Victor Studio, Audet’s Studio Marko and others such as the Associated Screen News, Stereo sound, André Perry, Tempo and the National Film Board, to name but a few. Together, they have produced a considerable body of high quality recordings, helped along the careers of generations of artists, contributed to many technical developments and established Montreal as one of the sound recording industry’s most active capitals.

A century of technological advances.

Last, but not least, we also find in this adventure a string of remarkable technological advances, which lead the way to ever more refined sound recordings.

Such advances are highlighted by the artefacts presented in this exhibition. They range from a 1910 Berliner gramophone to modern day computers and sophisticated studio equipment. Most forms of sound recording are acknowledged here, including those related to film production.

This exhibition received financial support from the “Entente sur le développement culturel de Montréal” (the Agreement on the cultural development of Montreal) reached between the City of Montreal and the “Ministère de la Culture et des Communications du Québec”.